Today’s blog post, the first in a two-part series, was written by Andy Nilssen and Bill Haskins of Wainhouse Research in collaboration with Compunetix. Wainhouse Research is an independent market research firm that focuses on critical issues in the unified communications and collaboration (UC&C) market. The company conducts multi-client and custom research studies for industry vendors and consults with end users on key implementation issues. The firm also publishes a news blog, white papers and market statistics, and delivers public and private seminars as well as presentations at industry meetings.

What Conferencing Users Are Saying: Bring on HD Audio and Call Encryption

The fact is, not every solution out there delivers the goods in terms of high quality and secure conferencing. And it’s not for lack of available technologies – in fact, HD Audio and Call Encryption technologies have been available for years. Wideband audio made its debut in the late 1980s for HD radio broadcasts, and was then adopted in the mid-90’s by early video conferencing systems, thanks to video’s digital encoding requirements. Encrypted phone calls were also introduced in the 80’s, but required special phones to encrypt and decrypt a call over analog PSTN connections. Of course, due to cost and complexity, usage was limited to applications where security was essential.

Things changed with the adoption of voice over IP (VoIP). As audio calls went digital, both technologies could suddenly be implemented in software. Adding fuel to the fire, the conferencing industry has benefited from increasingly powerful server hardware, personal computers, and smartphones that can easily run that software – not to mention the increase of readily-available and cost-effective bandwidth. Add all of this together, and you have an environment able to support conferencing HD audio and encrypted calling.

So, the time has become ripe to ask: do mainstream users understand these features? Has their increased reliance on conferencing as a business tool, combined with changes in external “environmental” factors, increased their value? To find out, Compunetix commissioned Wainhouse Research to conduct a survey of 300 respondents that use conferencing at least three times a week. Here’s what we found.

Ask the typical audio call user if they like wideband HD audio, and you’re likely to get a blank stare. So, in order to bring our survey respondents up to speed, we asked them to listen to the following audio clip:

Then, we asked them a bunch of questions about their experience. Here’s what they told us: 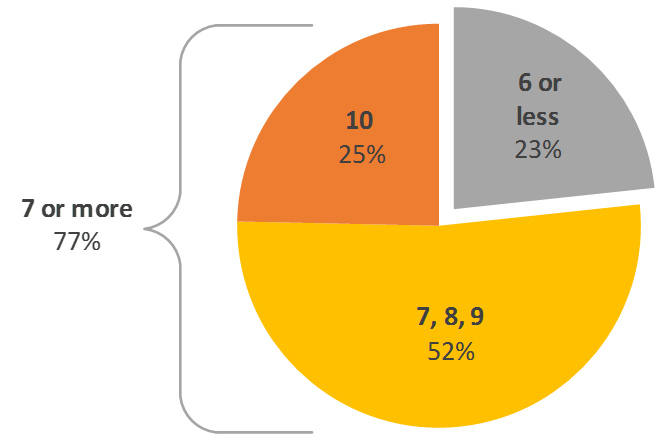 On a scale of 1 (no difference) to 10 (much better), do you personally feel that an HD audio call is better than a traditional phone call?

We also found it interesting – if not a little surprising – that many respondents weren’t aware of this HD goodness. Two-in-five (40%) of the respondents noted that HD audio calls are new to them, while the remaining three-in-five (59%) said that they had been previously aware of HD audio calls. 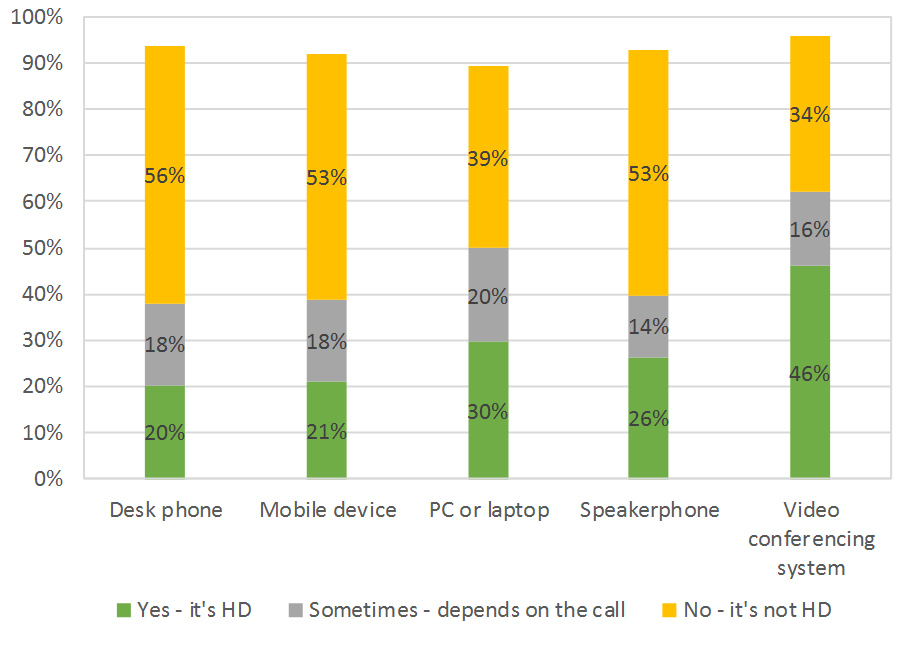 Do you think you are currently experiencing HD audio when you participate in conference calls using a …?

While users overwhelmingly like HD audio calls, most believe they are not experiencing it. Only 1-in-5 (20-21%) respondents believe they are experiencing HD audio when joining a conference call via their desk or mobile phone – while over half (53-56%) believe they are NOT experiencing HD. Another 18% say it depends on the call (those that did not report were unsure). The number of respondents who said they experience HD calls increases to 3-in-10 (30%) when a PC or Laptop is involved. Videoconferencing users were most likely to report an HD call experience – but still, under half (46%) of that group reported affirmative here. 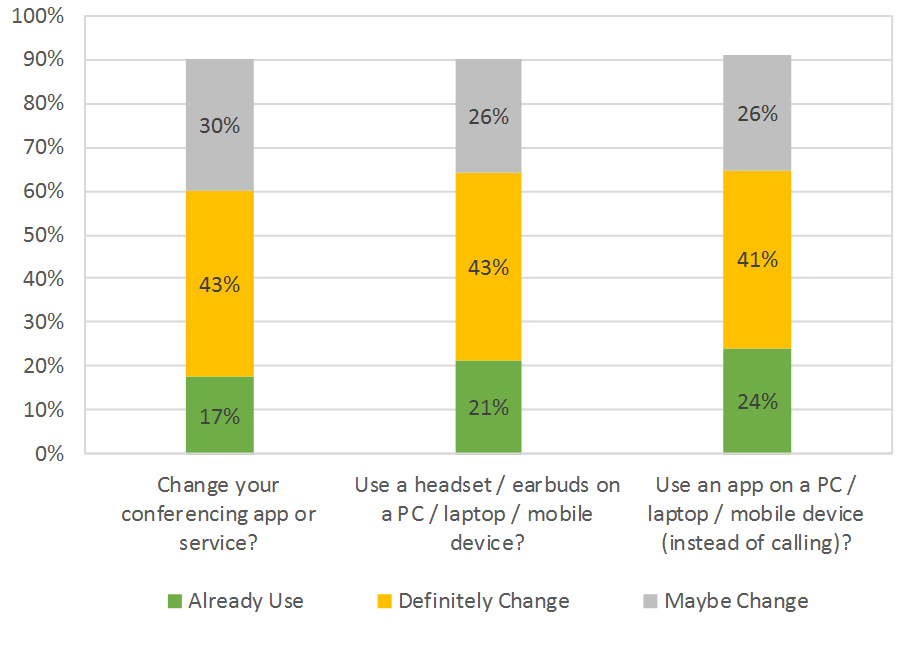 Would you change what you are using today to gain HD audio?

Finally, 2-in-5 (40%+) of respondents are “definitely” willing to change what they use today to gain HD audio across the above conferencing solution components. So, to summarize, these respondents told us “I like it, I don’t have it, but I want it” on the HD audio topic.

With increases in the number of public cases of hacking, data breaches, and privacy concerns, we expected the average conferencing user would be very security-conscious. Here is what they told us: 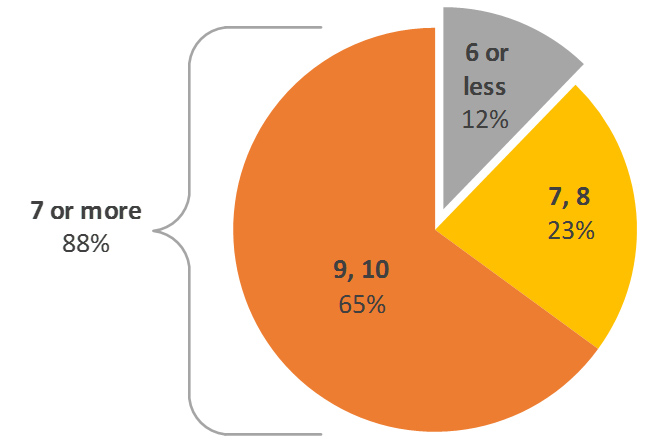 On a scale of 1 (not that important) to 10 (very important), how important is call privacy and security to your organization? 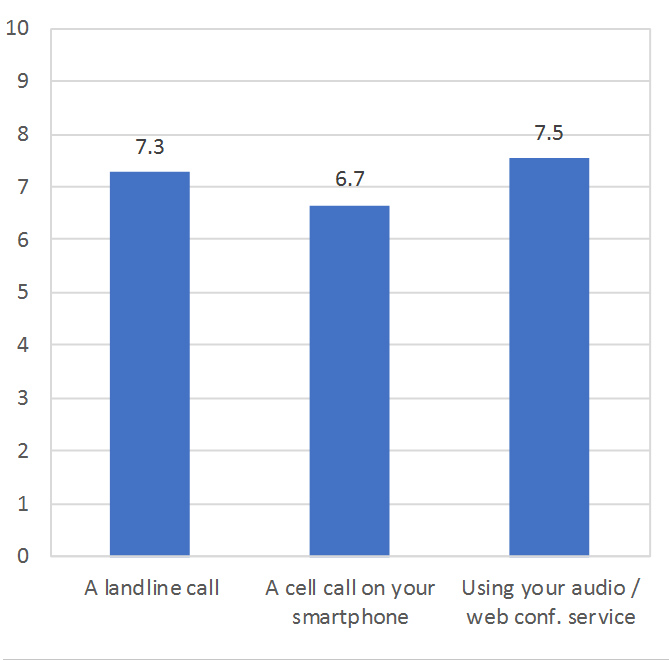 On a scale of 1 (not adequate) to 10 (very adequate), do you feel that adequate security is in place to prevent someone from listening in or recording your calls when using the following?

Given a scale of 1 (not adequate) to 10 (very adequate), users are only moderately confident (6.7 to 7.5) that their audio calls are adequately secure. Specifically, audio / web services score highest (7.5), followed by landline calls (7.3) then cell calls (6.7) – though the confidence in all methods is pretty close.

Comparing these scores with the importance level users give call security in the previous question – and there is a potential miss-match. 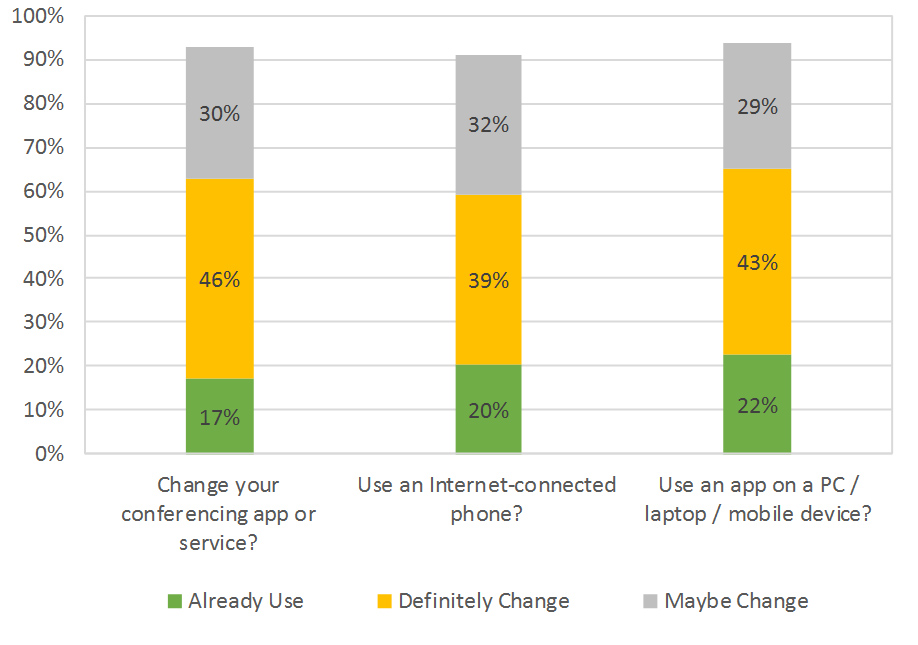 Would you change what you are using today to ensure your calls are encrypted for security?

Also of note: close to 3/4’s (73%) of respondents would “feel better” if a padlock ( , like those indicating a secure web browser connection) were displayed on their smartphone, telephone app, or audio / web conferencing client when their call is being encrypted for security. So, same as with quality – I need, might not have it, but want it!

From a user standpoint, once users become familiar with the concepts, the survey data indicates that they want both HD and encrypted audio calls, and many are willing to change what they use and their behaviors to get it. It appears the increased use of conferencing solutions and the changing environmental concerns surrounding security align well with the industry’s ability to deliver these capabilities. This being said, in both cases, filling the need requires the user moving to a true end-to-end solution – which may require changes in application software, devices, and services.

From a provider standpoint, the timing is ripe for programs to increase awareness, promotion, and differentiation of services and apps that deliver these capabilities – such as the Compunetix Summit Olympus media processor with the Compunetix Olympus HD Secure Audio Client. Provision demo accounts and support resources so that users can experience the benefits of HD call quality first hand. There’s an awful lot of marketing out there, so it’s important to back messages up with the tech – users and buyers are getting smarter, so be ready to talk bits and bytes on your quality and security value proposition.