Bill Voltz graduated with degrees in Electrical Engineering from West Virginia University. In the two decades following his graduation, he filled several instrumentation, project management, and engineering management positions before landing as a design engineer with Compunetix in 1994. In 1995, Bill was promoted to program manager within the Communications Systems Division. He worked on a large FAA contract, assuring the project was done in time and to specifications. In 1996 Bill was assigned to the newly created role of Manager of Field Services with a team of only three engineers. Over the course of the following 20 years and as the position and responsibilities changed to meet market and customer demands, he transitioned to his current role as Director of Customer Services with over seven employees in various support functions reporting to him. Bill’s most valued experiences with Compunetix involve collaborating with customers to solve their hardware and software issues. “Thank you to the customers and their helpfulness throughout the years. It’s been fun!” states Bill.

“Bill has not only cared for our customers over the years, but he has also mentored many of our best engineers,” comments Jerry Pompa, Senior Vice President and Manager of the Communications Systems Division. “Bill’s staff are known for being some of our most skilled engineers, and many of them have moved to other roles within CSD and different business units of Compunetix helping to spread expertise throughout the divisions and sister companies.”

Upon his retirement, Bill plans to spend time with family and catch up on his reading.

Congratulations, Bill, on a well-earned retirement! 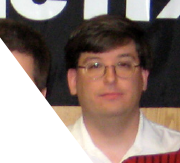 Greg Nesbitt has been a staple of the Compunetix Customer Service Team for the past 18 years and will be taking over for Bill Voltz as the organization’s new Director of Customer Services. Greg graduated from the Rochester Institute of Technology with a degree in Electrical Engineering. Wanting to return to his hometown of Pittsburgh, Greg accepted his first job with Compunetix within the Customer Support Group and has been with the company ever since. He has worked directly with customers 90% of his time, and appreciates the challenges customer support provides. “I never know what I’m stumbling into each time I answer a call – it could be anything from an equipment issue or a customer wanting to discuss the nuances of a training manual,” Greg explained.

The aspects of the new role that intrigue Greg the most are having a bigger picture of the customer needs and requirements in order to assist with long-term business goals for both the customers and Compunetix. He plans on growing customer relationships and finding new and different ways to relate as products evolve and solutions change. “Compunetix does business in a unique way,” mentions Greg. “We’re straightforward, eager to help, and we’re involved. I plan to continue that tradition.”

Greg has valued Bill acting as his mentor and has learned valuable lessons from their interactions, such as how to be
respectful and treat customers in such a way that they respond on a peer-to-peer level.

“Greg has been the ‘go-to guru’ for many years. He is highly respected for his competence and cool-natured approach
both inside and out of the company. We are confident in him expanding his scope by taking charge of the group,” states
Jerry Pompa.

Headquartered just outside the picturesque city of Pittsburgh, PA, Compunetix has grown into a leading manufacturer of multipoint collaboration equipment and web collaboration software in the world. With over one million ports installed in more […]

Navigating the Internet of Things

Today’s blog was written by Victoria Plack of our sister company, Sonexis. Simplifying Our Future The Internet of Things (IoT) is a very intriguing and exciting topic. It is one that has allowed for our […]